Home Page > Briefings > Since you asked: Is it me, or is the government releasing less...

Since you asked: Is it me, or is the government releasing less data about the criminal justice system?

The Bureau of Justice Statistics is tasked with collecting, analyzing, and publishing data about the criminal justice system. But its reports are slowing down - and its framing of criminal justice issues is becoming more punitive.

We’ve heard this question from a few advocates and journalists who, like us, depend on the Bureau of Justice Statistics (BJS) and other government data sources for timely information about the justice system. And while monitoring changes in federal data collections isn’t a core part of our work, we have observed a troubling trend: Since 2017, data releases are slowing down.

We aren’t the only ones who have noticed. Last month, a coalition representing thousands of academic and nonprofit researchers and advocates wrote to the Office of Justice Programs with questions about missing and delayed data releases as well.

I probably don’t have to convince our regular readers that timely data is essential for identifying both social problems and effective policy solutions — and that it’s especially important in the context of criminal justice, where the human costs are so high. And admittedly, it’s not news that government justice data has long been less well-funded, less timely, and less comprehensive than, say, labor statistics.

Even so, these publications have slowed even further — and even been curtailed — under the current administration. To see the extent of this trend, I went through the BJS’ list of publications since 2000 and compared the time between the data collection reference dates and the corresponding report publication dates for six annual report series. I found that there has indeed been a dramatic change in the past several years: 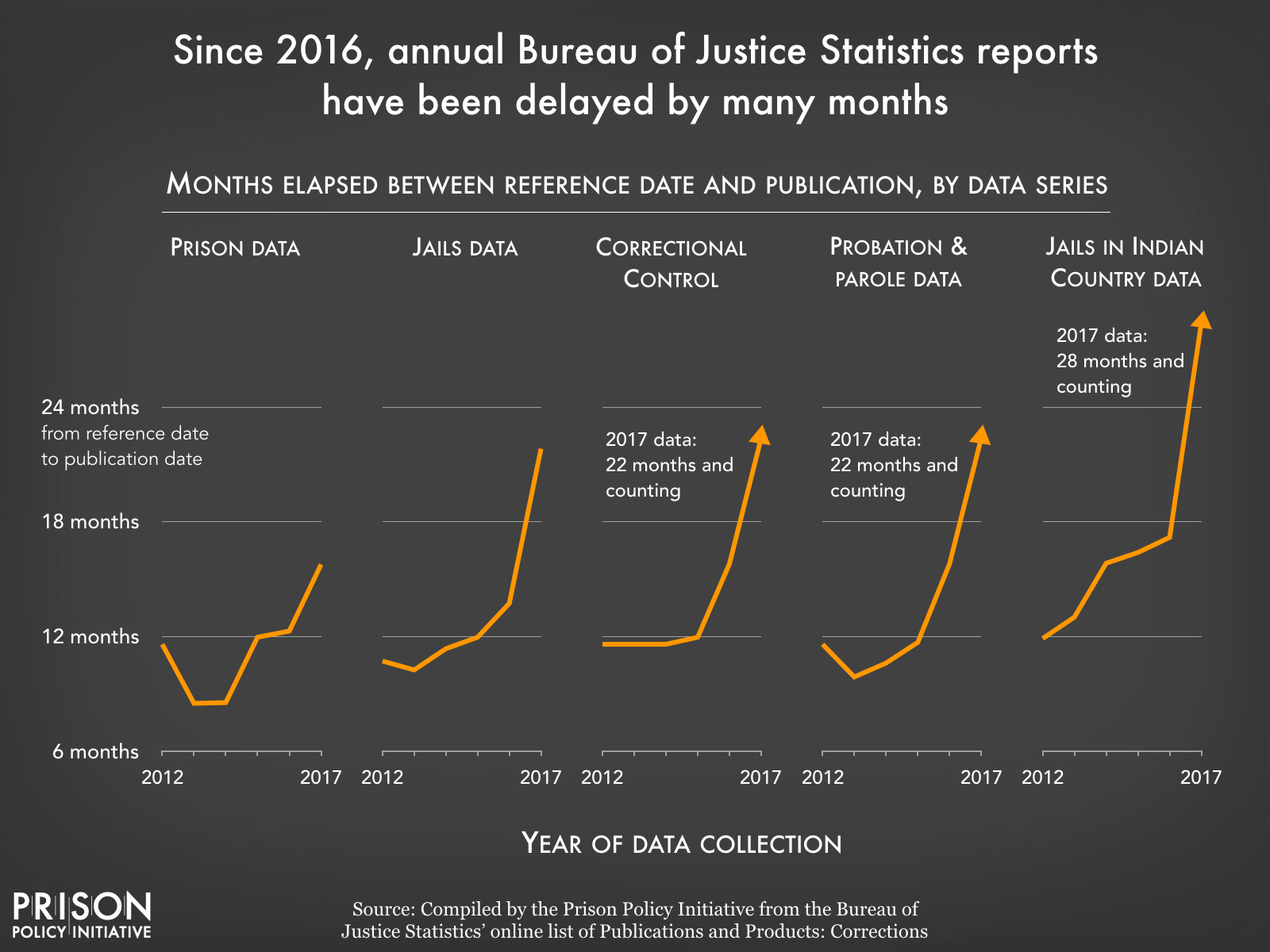 The time between data collection and data publication for most regular Bureau of Justice Statistics reports has increased dramatically in the last few years.

I looked at six report series that have been on annual schedules for years: Jail Inmates, Prisoners, Probation and Parole in the United States, Correctional Populations in the United States, Jails in Indian Country, and the Mortality series (formerly Deaths in Custody). These are the reports that we rely on to produce our Whole Pie and Correctional Control reports, and provide data for many of our other briefings and publications.

I found that while data collection activities for these series have continued, BJS data releases and reports have all experienced significant delays, starting in 2017: 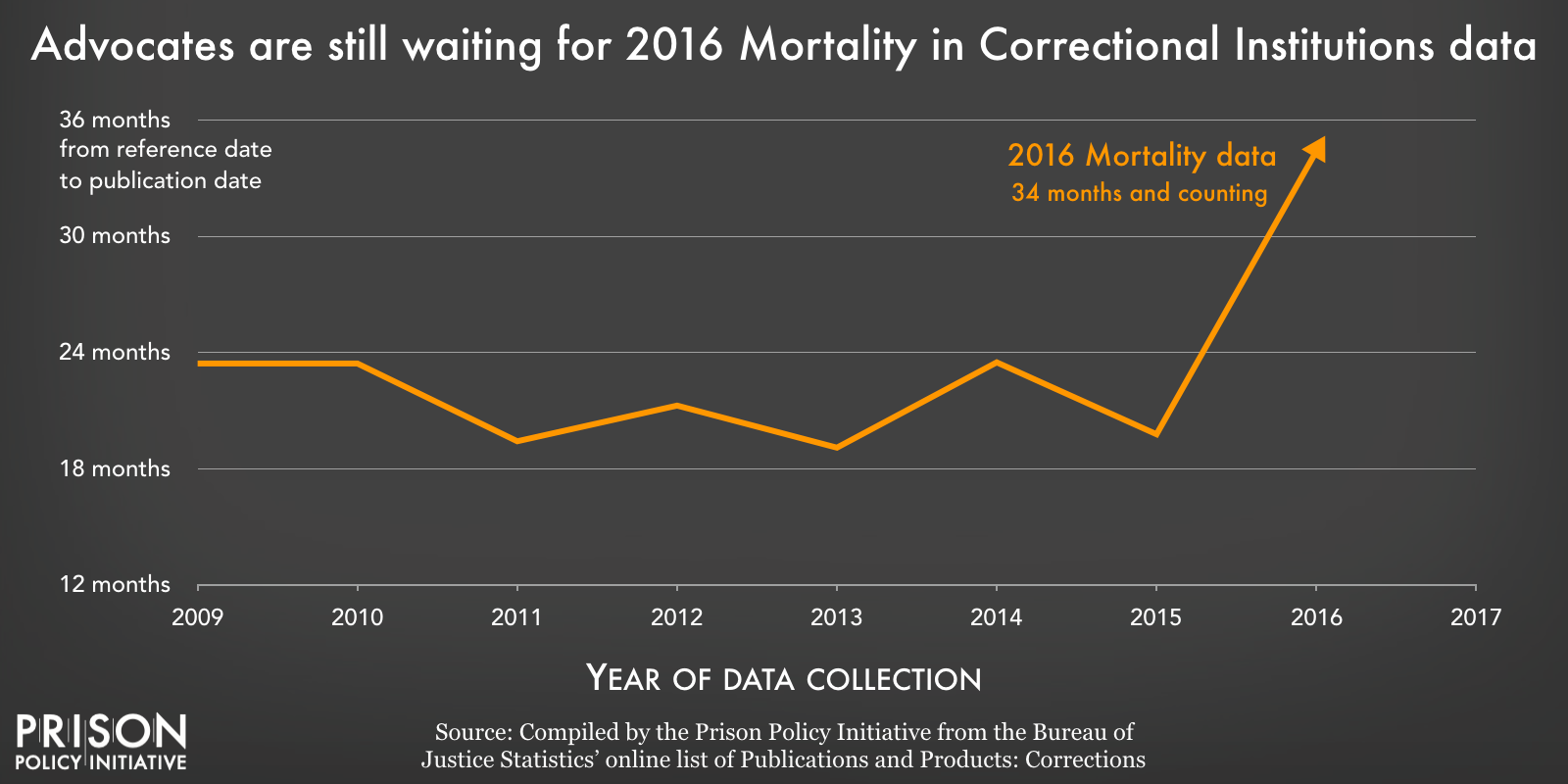 Researchers and advocates are concerned about other delays at BJS

In October, as I mentioned above, a coalition headed by the Crime and Justice Research Alliance and COSSA wrote to the Office of Justice Programs with questions about other missing and overdue BJS publications.

Of special concern is the 2016 Survey of Prison Inmates (SPI). The SPI was conducted every 5-7 years from 1974-2004, and was finally conducted again in 2016. In the intervening years, we saw the high-water mark of mass incarceration thus far, and witnessed tremendous growth and change in correctional control. Yet BJS has published none of the invaluable data contained in this survey, which includes “demographic characteristics, current offense and sentence, incident characteristics, firearm possession and sources, criminal history, socioeconomic characteristics, family background, drug and alcohol use and treatment, mental and physical health and treatment, and facility programs and rule violations, etc.” Almost none of the 2016 data has been released, three years later and counting. Only a report on the methodology and a report on a subset of the data on firearms have been released to date.

The coalition’s letter also highlights delays in the annual Background Checks for Firearms Transfers reports (the last data reported are from 2015), and asks whether a planned survey of police forensic units, commissioned by the Department of Justice in 2014, has been abandoned.

It gets worse: Important data on jails and pretrial detention won’t even be collected for years

The Bureau of Justice Statistics is also many years behind schedule for at least one crucial and long-awaited data collection, the Survey of Inmates in Local Jails (SILJ). The SILJ was collected every 5-7 years from 1972-2002, and it provides the most comprehensive, nationally representative data available on people held in local jails. It’s especially important for the information it offers about the pretrial (or unconvicted) population. Unbelievably, the 2002 SILJ is the most recent source we have to measure what portion of people held pretrial are there because they can’t afford a bail bond, what racial disparities exist among pretrial detainees, and what offenses people are locked up for before trial. After much delay, the current plan has the next survey slated for 2021; assuming it is released in 2022, it will be 15 years off-schedule.

Another data series that sheds light on pretrial decisions, State Court Processing Statistics, was “halted in 2009 due to concerns about cost and representativeness,” according to a recent BJS-funded study by the Urban Institute. According to that report, BJS “plans to implement a new data collection series to develop national statistics on the processing of pretrial defendants…This program, National Pretrial Reporting Program (NPRP), was conceptualized to supplement or replace the State Court Processing Statistics (SCPS) program.” While the feasibility study tested an experimental survey and recommended an alternative sampling method that would make the sample nationally representative, it’s been 10 years now since BJS has released any new data on pretrial processes.

Beyond delays: “Trimmed” data from the FBI, politicized language at OJJDP and BJS

Government justice agencies have not merely delayed their data releases: They’ve also made partisan decisions that undermine the transparency and impartiality we expect from them. These issues extend beyond the Bureau of Justice Statistics to other reporting agencies.

In 2017, the FBI “strategically trimmed the amount of tables” from 81 to 29 in the agency’s annual report on arrest data and trends, Crime in the United States. The missing data included information as fundamental as arrests by sex. In response to “user feedback” — and very likely, assertions that it reflected the Trump administration’s “suppression of government data and…unwillingness to share information” — 70 “supplemental” tables were later released.

Advocates have also noticed troubling changes on the Office of Juvenile Justice and Delinquency Prevention’s website, changes “that indicate a shift toward a more punitive approach to juvenile justice under the Trump administration.” For example, a webpage with the OJJDP’s policy guidance on “Eliminating Solitary Confinement for Youth” was taken down, and the new administration also issued a “language guidance” document directing OJJDP employers and contractors to replace widely-accepted terms with decidedly less pointed terms that downplay systemic problems. The document suggested changing references to “justice-involved youth” with the more stigmatizing “offender” label, “underserved youth” with “all youth,” and avoid referring to juvenile delinquency or crime as a “public health issue” and always emphasize “public safety.”

This signaling of the new administration’s priorities wasn’t just performative; the new OJJDP administrator Caren Harp also attempted to undermine efforts to reduce racial disparities among justice-involved youth by “slashing the kinds of data that local agencies must collect.” Harp reasoned that there hadn’t been enough progress to justify the data collection — leaving advocates wondering how collecting less data would improve matters.

In a previous briefing, I’ve already highlighted some alarmist framing in a recent BJS press release; other analysts and advocates have noted these “heavily politicized” communications as well. While the BJS reports themselves remain valuable data sources and politically neutral in tone, the headlines of the accompanying press releases in the past year or so have become increasingly alarmist and reflective of the Trump administration’s rhetoric. (Of course, this is not the first administration to politicize press releases: many will remember that former BJS Director Lawrence Greenfeld was replaced in 2005 because he objected to the Bush administration’s attempts to suppress findings of racial disparities in a BJS press release.)

So what’s going on?

The reasons behind these decisions and delays are unclear — is it funding problems? Staff shortages? Changes in leadership? It could well be any, or all, of these problems.

BJS has been “flat funded” for years, despite the massive growth in the number and size of the correctional agencies they survey, and despite increasing demands for justice system data under laws mandating annual data collection, like the Prison Rape Elimination Act and the Deaths in Custody Reporting Act. A National Academies publication explains that this has been a problem under both Democratic and Republican administrations, going back decades.

The Crime and Justice Research Alliance and COSSA — the coalition that wrote the October letter to the DOJ I mentioned earlier — suggest that staffing problems may explain the delays. They write, “[M]any in the criminal justice research community have heard of an alarming decline in the number of BJS staff as a consequence of hiring freezes, staff attrition, and failure to replace departing staff and experts.” Again, this is an agency that has been chronically underfunded and understaffed relative to the herculean task of collecting and analyzing the nation’s decentralized justice system data.

And then there is the issue of leadership. With its mandate to produce reliable, large-scale studies with national, state, and local policy implications, effective leadership at BJS requires “strong scientific skills, experience with federal statistical agencies, familiarity with BJS and its products, [and] visibility in the nation’s statistical community,” among other qualities. That’s according to four former BJS Directors and the President of the American Statistical Association, who wrote to former Attorney General Sessions in 2017 to encourage the appointment of an experienced research director to head up BJS.

That didn’t happen. Instead, since late 2017, the Bureau of Justice Statistics has been under the leadership of Jeffrey Anderson, whose only prior statistical experience appears to be the co-creation of a college football computer ranking system in 1992. On criminal justice, all I could find in his history were a handful of 2015-2016 articles in which he argues against criminal justice reform. In a National Review article, he called Obama-era Washington “tone-deaf on crime,” despite the widespread bipartisan support of criminal justice reform. Sadly, the problems we’re seeing with data delays and politicized language suggest that the current leadership may not agree about the importance of the agency they lead.