Some of these companies call themselves phone companies, but the phone service is little more than a gimmick to charge expensive fees. Our analysis of the FCC’s Second Further Notice of Proposed Rule Making is that the agency is clearly onto the industry’s dirtiest trick: charging consumers hidden fees. Some of these companies call themselves phone companies, but the phone service is little more than a gimmick to charge fees.

We’re thrilled at the FCC’s attention to fees, but we haven’t yet gotten the media and lay audiences to understand that the distinction between rates and fees is far more important and far less semantic than it appears at first blush. Let me explain:

Rates: This is what you pay per minute, including any higher charge for the first minute of the call.

Fees: This is everything else you pay for “services” related to the call, including fees to open an account, have an account, fund an account, close an account, get a refund, receive a paper bill, or other charges that are made on a per-call basis, such as charges for “regulatory compliance” or “validation”.

If the FCC were to ignore the fees, that mistake would undermine any reforms that are made to the rates for the three reasons we discuss in our report Please Deposit All of Your Money: Kickbacks, Rates and Hidden Fees in the Jail Phone Industry:

In sum, the fees allow the companies to both circumvent the FCC’s rate caps and make possible the entire shell game of winning contracts by promising to pay what are actually impossible commissions.

It’s easy enough to understand why high fees are bad for the families paying for the calls, but they are bad for the facilities too. As one of the more ethical phone companies recently explained in a colorful video, the companies are asked to compete on the basis of who will promise the facilities the largest share of the rate pie; but they are never asked to disclose the existence of an entirely separate pie of income extracted from the fees charged to the families. The companies playing the fee game look generous because they are promising to share up to 99% of the rate revenue with facilities, but that “generosity” is only possible because the company is hiding the revenue it collects from fees.

Sadly, some facilities learn about this and then look away. They don’t see a reason to stick up for their taxpayers, nor do they see any self-interest in enforcing ethical behavior with their business partners. This story illustrates what the facilities are missing:

Bonnie and Clyde rob banks and they agree to split the loot 50-50.

It turns out that Bonnie sometimes robs banks on her own without telling Clyde. He’s not going to care, right? As long as she doesn’t do something that gets them both caught, what impact does it have on him?

Well, one day, Clyde notices that they are making less money than they used to. The typical haul is down, but hey, it’s still easy money. But the strange thing is that Bonnie keeps on buying new cars and new clothes as if the hauls were huge like in the old days. Maybe Bonnie buys things on sale?

Clyde is getting suspicious, and nothing is adding up. It’s easy to trust Bonnie, and she is certainly being more helpful than ever. She’s always on time; heck, she volunteers to case the banks first and doesn’t ask for an extra share of the loot for her extra work.

Then one day, Clyde decides to get to the next bank even earlier to watch Bonnie case the joint. What does he see?

We made it easy for sheriffs who want to protect their taxpayers and themselves from their partners. All they have to do is ask their vendors these easy questions about how fees and commissions are calculated.

What the sheriffs are missing is that by allowing their partners to fleece families out of half a billion dollars a year in fees, they are ensuring that the poorest families in their counties won’t have very much money left to pay for the actual, commission-producing, calls. 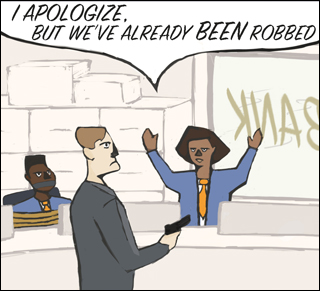 And phones aren’t the only industry in which fee harvesting is the new business model. Take our work on release cards. Private companies reach out to jails with offers to take over all of their money management woes – at no cost to the county.. Previously, jails had to keep track of the money people were arrested with or were sent by family members and then, upon release, issue a check or give cash. Now, private companies take the cash and give people pre-paid Mastercards instead. The jails ask: What could be more convenient than that?

The better question is this: How is it even possible to provide a valuable service for free? It’s not. These companies exist by charging the people who are forced to use their cards exploitative fees like $3.50 a week for the account, $0.95 for purchases, $3.95 for checking their balance, and $30 for closing their account.

Most people who run correctional facilities see it as their job to make our communities safer and stronger. One of the simplest ways they can meet that goal would be to start working much harder to ensure that the facilities aren’t complicit in making the poorest among us any poorer.

Focusing on fees is one of the most important ways to ensure that both families and facilities are protected from the companies that have the interests of neither at heart.

Illustrations by Prison Policy Initiative Research Associate Elydah Joyce. To help other organizations explain fee harvesting in their own work, she has made these illustrations available under a Creative Commons license on Flickr.